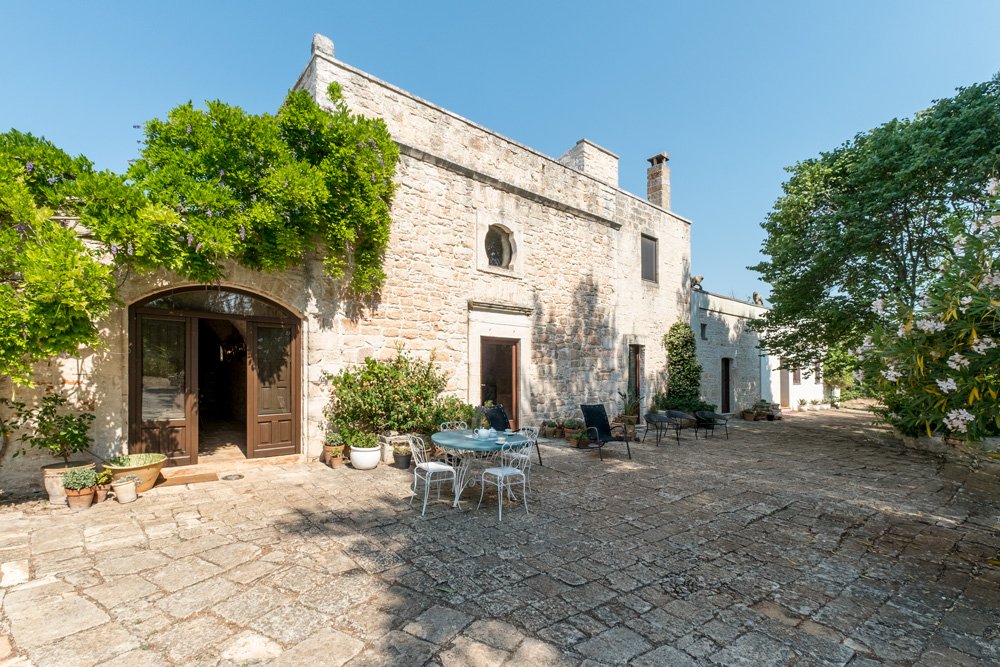 Set on five acres among olive and almond trees and brimming with history, this villa in Puglia was once a chapel and monastery dating back to the 1300s. It's now a tranquil and chic Italian getaway within 5-30 minutes of medieval towns and pristine beaches with secret coves.
Traditional stone architecture extends throughout, acting as a decorative piece of its own. The villa blends classic decor and antique furnishings with stylish modern features, such as craftsman vessel sinks. Four simple bedrooms sleep eight, each with their own bath, and the full kitchen and common areas are spacious and inviting, complete with fireplaces and ‘cantina' dining.
Outside, a private oasis with sun loungers beneath canopies, a swimming pool, and exotic gardens with fruit trees await. Alfresco dining on original stone piazalle or covered terrace is a must with the wood-fired pizza oven on hand. Plus, the villa boasts a secret, underground limestone cave dating back to the 7th century with medieval frescos!
A stay at this ancient villa places you within walking distance to the foodie haven of Ceglie Messapica, complete with its famous Trulli houses. Be sure to try Osteria Pugliese – a local favourite and New York Times recommended.

Perfect Puglia: “Set in five acres of exotic gardens with olive trees and giant cacti (think Jurassic Park) our home for the week sleeps eight and blends stylish decor with antique furnishings and stylish modern features. 'Wow, we are sleeping in our very own castle!' shouted my excited five-year-old boy Zak…”
Read the full review of Villa San Michele, over on the Daily Mail


#### Features
Bedrooms and Interior
The accommodation is in the original stone construction whose thick walls keep the house cool in summer and warm in the winter months. There are four bedrooms and four bathrooms sleeping a total of eight people (further rooms can be added by arrangement).

The 13 by 6 metre pool is reached by twin sets of steps and is surrounded by a large paved area with loungers and umbrellas. A shower is ingeniously placed under the branches of a spreading olive tree.

The grounds have been planted with desert plants, designed to stand the long dry summers in the region. Trees include Olives, Almonds walnuts, mulberries, figs, pomegranates, lemons, quince and prickly pears.
*The Grotto:
Near the property is a large natural limestone karst cave or grotto, some 52 metres deep. The entrance to the grotto, shaded by fig and olive trees opens to reveal a huge cavern. Stone stairs descend in two directions.

There is some evidence that the cave has been occupied by humans since neolithic times.The cave was settled from around the 7th century AD by Basilian (Byzantine) monks who had escaped persecution in Constantinople and this religious settlement remained there for several centuries.
Descending into the first part of the grotto, covered in stalactites, is a large altar hewn out of the solid rock. Above and to one side of the altar is a fresco of the Virgin (Vergine Orante), which studies have shown to be the oldest in Brindisi province, dating from the 8th century AD. Directly above the altar is a well preserved fresco of Christ, (Cristo Pancreator) and another of San Michele, both of which date from the 11th century.

Locals say that tunnels lead from the grotto and run for several kilometres. During the 1800´s the land surrounding the house was a vineyard and during this time an important ancient Messapican vase was found, 30 cm tall, which was transferred to the archaeological collection of the Museum of Berlin.

#### Location
Van San Michele is situated in Ceglie Messapica, a charming small town of white washed houses and narrow streetslocated in the province of Brindisi on the edge of the Valle Itria. It is famous for its Trullis, stone built conical buildings typical of this area of southern Italy.

The landscape is typical of the area, particularly rich in nature and history. Dotted around the surrounding land are countless Trulli as well as ancient farms called Masseria. It is home to dry, stone walls, olive groves, vineyards, and woods with ancient oaks.
The town of Caelia is close and also rich in history and culture. It traces its origin back 15 centuries before Christ and was originally part of Magna Grecia (Greater Greece).
Puglia is considered one of the best places to eat in Italy by Italians, and Ceglie Messapica is considered one of the best places to eat in Puglia. There are many restaurants in Ceglie, ranging from simple trattoria to Michelin starred affairs. Many of them will offer some version of what is known as Cucina Povera, literally "poor cooking", derived from a time when the residents of this area of Italy had to make do with simple ingredients and transform them into something more.
Less than half an hour away are the beaches of the Adriatic coast where there are many quiet coves with crystal clear water and long, sandy beaches backed by dunes. A little over half and hour on the other side of the peninsula are the stunning beaches of the Ionian coastwhere mile upon mile of white sandy beaches extend south to the tip of the heel of Italy.

The airports of Brindisi and Bari, both with direct flights from the United Kingdom, are 30 minutes and 1 hour 10 minutes respectively from the property.

Details
View Offers
More villas in Italy
Review us on