The Azure Beach Villas Boast A Fabulous Position Just A Short Stroll From The Beach And The Amenities Of Nopigia Village. 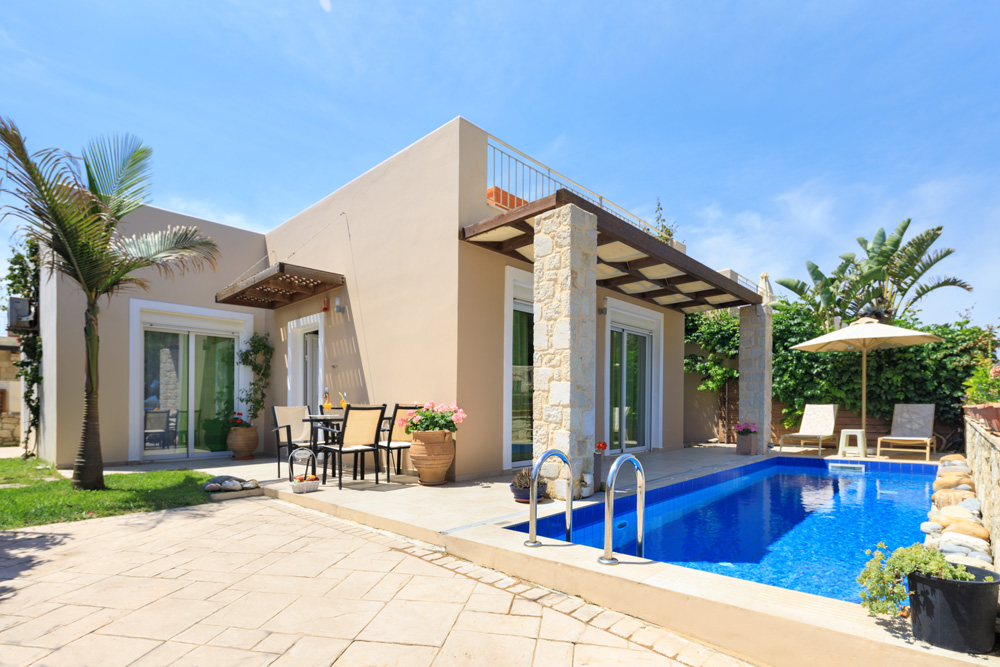 The Azure Beach Villas boast a fabulous position just a short stroll from the beach and the amenities of Nopigia village. For those that wish to explore further afield, the town of Kissamos is only a short car journey away. The modern and bright 3-bedroom villas comfortably sleep six guests, while an additional person can be accommodated on the sofa bed in the living room. The accommodation is set out over one level and comprises of a spacious lounge, kitchen and dining area as well as a double bedroom and two twin rooms. There is access to the pool area from each of the bedrooms and the living room. Outside, the private pool is the perfect spot from which to soak up the sunshine. While the outdoor dining area is fantastic for al fresco dining! ***PLEASE NOTE : Images are of two of the properties within this small cluster of five 3-bedroom villas, therefore your allocated villa on arrival may differ very slightly in design/furnishings and pool size***

Kissamos is a modern seaside town, 35km east of Chania. Here the economy is based mainly on agriculture – with olive oil and wine both being produced. Tourism is of course also important. The beauty of Kissamos is that it embraced tourism but not been spoilt by it. As a visitor you get to experience local Greek life as well as special cultural events organized during the summer season. In recent years it has also developed alternative, natural and eco tourism. The natural beauty is a magnet for walkers, bird watchers and lovers of nature generally. Like most of Greece it is a hospitable town, well organized with all the facilities such as banks, post office, internet cafes, health centre, supermarkets and stores, tavernas, cafes and bars. The seaside promenade lined with tavernas, cafes and bars open from the morning till dusk. There are ships running from Kissamos harbor to Kithira, Peloponnese and Pireaes. There are also daily cruises from Kissamos to Gramvousa and Balos lagoon. The archeological museum of Kissamos is a recently renovated building housing local archeological finds from the Hellenistic and Roman periods – most notably very impressive mosaics. Skalidi, which runs through the centre of the old section of the town with traditional architecture and artisian shops. One and a half kilometers from the centre of town is the quaint fishing port with a few tavernas and a little further on the larger commercial port that links Kissamos by a ferry service to Kythera , the Peloponnese and Piraeus. From this port there is also a daily pleasure cruise to the stunning island of Gramvousa and lagoon of Balos. Between the two ports is the surprising little 10th century church (reconstructed in 1947) St. John Damiali built into the rockface and opposite a tunnel leading to Damiali beach – a pebbly cove with crystal clear water that will enchant you. Kissamos was also known as Kastelli and got its name from the Venetian fort that used to stand in the town. The town flourished during the Roman period and much evidence of this has been uncovered, with Roman baths, villas with mosaic floors, cemeteries, an aqueduct and the remains of the fortress walls. In the museum there are archaic, classical and Hellenistic objects, pots, statues, glass containers and coins etc. Roman Kissamos also had a famous theatre which was noted by Onario Belli in the late sixteenth century, and the famous archaeologist B. Theofanidis has established Seli, an area just outside of the town of Kissamos, as a base for King Agamemnon. During the first Byzantine period Kissamos retained its power and the diocese was established but during the second Byzantine period the bishopric was moved to the village of Episkopi to escape the pirate raids on the coast. During the Venetian occupation the diocese of Kissamos was received into the universal church , as mentioned by a Latin bishop in 1307. During the period 1579 to 1582 a fortress with a pentagon shaped church, prison, barracks and well was constructed. Some of the wall is still visible in the town today. During the Turkish occupation Kastelli actively participated in all revolutionary attacks against the Turks and sought with Mother Greece.

Details
View Offers
More villas in Greece
Review us on