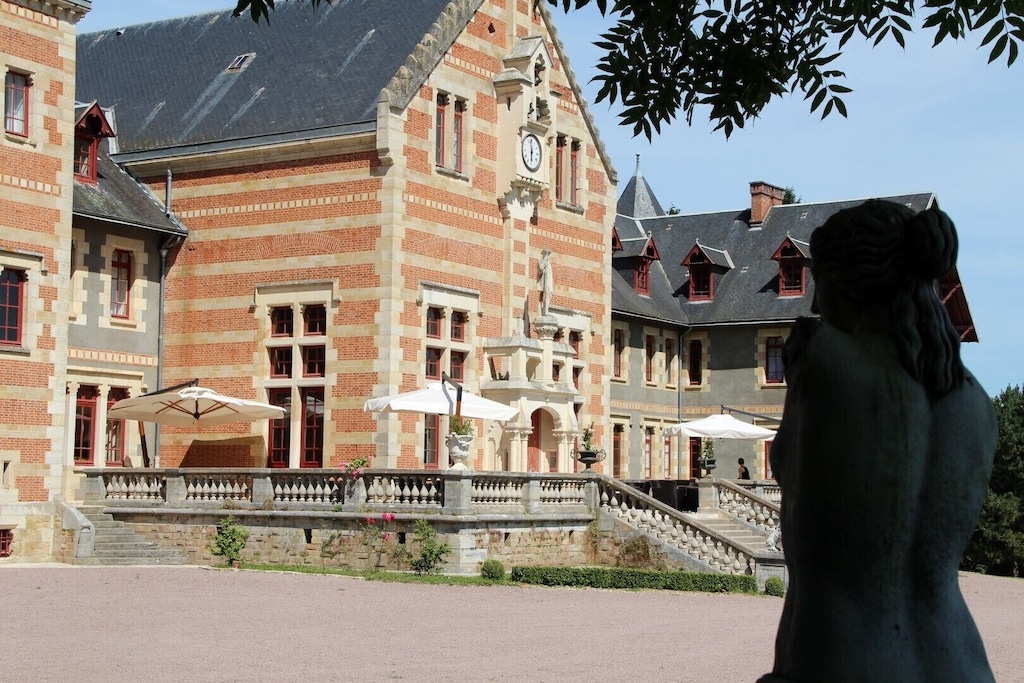 The Château is located in the canton of Lurcy-Lévis, 280 kilometers south of Paris, 220 kilometers from Lyon, 110 kilometers from Clermont-Ferrand and 60 kilometers from Bourges. It is the geographic center of the country, at the junction of the Burgundy and Auvergne regions. From here begins a vast area of nature reserves, which extends further south, occupying the volcanic plateau between the rivers La Loire and La Garonne.
The Castle is a typical manor of the French aristocracy. Its modern form dates from the middle of the 19th century. The oldest part of the Castle, the defensive tower having survived to the present day, refers to the 15th century. The Castle itself, according to medieval legend, was founded in the 11th century.
The Hotel can accommodate around 125 people for events. There are 10 superior rooms (41 m²), 2 suites (80 m²) and 7 standard rooms (23 m²) with all the amenities, furnished in a classic style. There are stylish rooms, suitable for a wedding or a romantic getaway.
The entire property is available for rental as well for spending holidays with family or friends as for business seminars or weddings, but also for film and photo shoots.
Spa Nestled in the heart of the hotel, Le Spa du Château reveals a whole universe of sensuality entirely devoted to your well-being.
Benefits:
• Hammam
•Sauna
• Aromatherapy
• Jacuzzi
Château Béguin will make you discover the benefits of the sun in its heated swimming pool and enjoy the many sports and activities. For your well-being you will find on site:
• 200 m² heated outdoor swimming pool with sunbathing area. It is open from May 01 to September 30.
• Fitness and bodybuilding room (Technogym)
• Tennis, basketball or volleyball on the multisport court
• Archery
• Balls
•Bike rental
• Table tennis (indoor and outdoor)
• Games room with billiards, mini-football and air hockey
• Large playground for children


RATES AND CONDITIONS FOR THE RENTAL OF THE CASTLE FOR EVENTS.

For the privatization of the castle for a small group (10 to 20 people), another rate will be applied.

The hotel can accommodate about 125 guests for events. There are available 10 superiors rooms (41m²), 2 suites (80m²) and 7 standard (23m²) with all amenities, furnished in a classical style. There are stylish rooms, which may be suitable for a wedding or a romantic getaway.

Outside:
Pool (heated, open from 1 may to 30 september)
jacuzzi
gym
Billiards
Mini football
Air hockey
Tennis and basketball
Ping pong
Bicycles (walk in the forest of 18 ha.)
Garden for the children
WI-FI (in the common areas).


THE RATES AND THE CONDITIONS FOR RENTING THE CASTLE FOR EVENTS.

For a small (10 to 20 people) group for the privatization of the castle another tariff will be applied.

Details
View Offers
More villas in France
Review us on