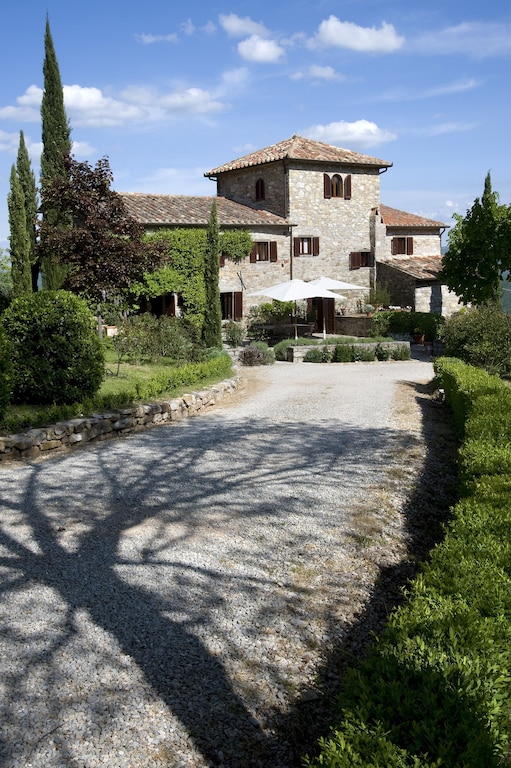 Fonte Vecchia is the name of this rebuilt medieval farmhouse. Parts of the house are believed to date back to the XIVth century when it was probably a watchtower guarding the valley below and the frontier between the Grand Duchy of Tuscany and the Papal States. The two were frequently at war. Before that the Romans occupied the area. It was near here that the Roman Empire suffered its single greatest military defeat when Hannibal wiped out the Roman legions during a daylong battle near Tuoro on nearby Lake Trasimeno.

Enchanting, secluded old Tuscan farmhouse with breath-taking views of hilltop villages, the Niccone valley and the distant Abbruzzi mountains, restored to a high standard of luxury whilst retaining the traditional features. Located 20 minutes from the Etruscan hilltop town of Cortona. A watchtower forms part of the building, a reminder of the often tense relations between the Grand Duchy and the Pope.

The main house has four bedrooms (all doubles and all with their own bathrooms), plus a study in the tower, a kitchen, pantry, two living room, a dining room and an entrance hall with a guest toilet. Below there is a changing room and bathroom and a fenced swimming pool in the gardens.

Inside the feeling is of simple elegance with country furniture, comfortable sofas with soft-toned fabrics and kilims spread over the terracotta floors of the arched double living rooms. The thick colour-washed walls and louvred shutters ensure this spacious house, 550 metres above sea level, remains cool in summer. The four bedrooms, all upstairs, have en-suite bathrooms and variable speed ceiling fans. Maid service, three hours a day, is included six days a week. The house is set in 7 acres of olive groves. Around the house there is a mature garden full of Mediterranean plants - lavender, rosemary, sage, broom, roses, bay leaf and climbers like wisteria, evergreen jasmin and honeysuckle. Cypresses and pine trees along with oak and lime complete the setting. Apart from fig trees dotted around the property, which is fenced in, there are greengage, cherry, apple and apricot trees on the sloping orchard and a vegetable garden. There is a covered terrace with barbecue overlooking the pool (perfect for lunch and dinner) and a large table with two patio umbrellas at the front (great for breakfast).

The 5x10 metre pool, with a depth ranging from 1.0 m to 2.2 m, has steps on one side leading into the water. Eight sun loungers and three large umbrellas plus tables surround the pool as well as a swing. There is a heat retaining cover for the nights. An optional child-proof fence is stored in the pool house when not required. The nearby village of Mercatale di Cortona has a baker, butcher, post office, two small supermarkets, two banks with ATM’s, and a petrol station as well as a friendly family restaurant, Trattoria da Mimi. Her son rents the tennis court there and offers lessons. Lake Trasimeno, 20 minutes away, offers safe swimming on a sandy beach with umbrellas. There is a regular ferry service to the small Isola Maggiore, which boasts a charming lake-side restaurant, and to Isola Polvese, a nature reserve, also with a restaurant.

A barbecue is provided and kept on the covered terrace.

Details
View Offers
More villas in Italy
Review us on